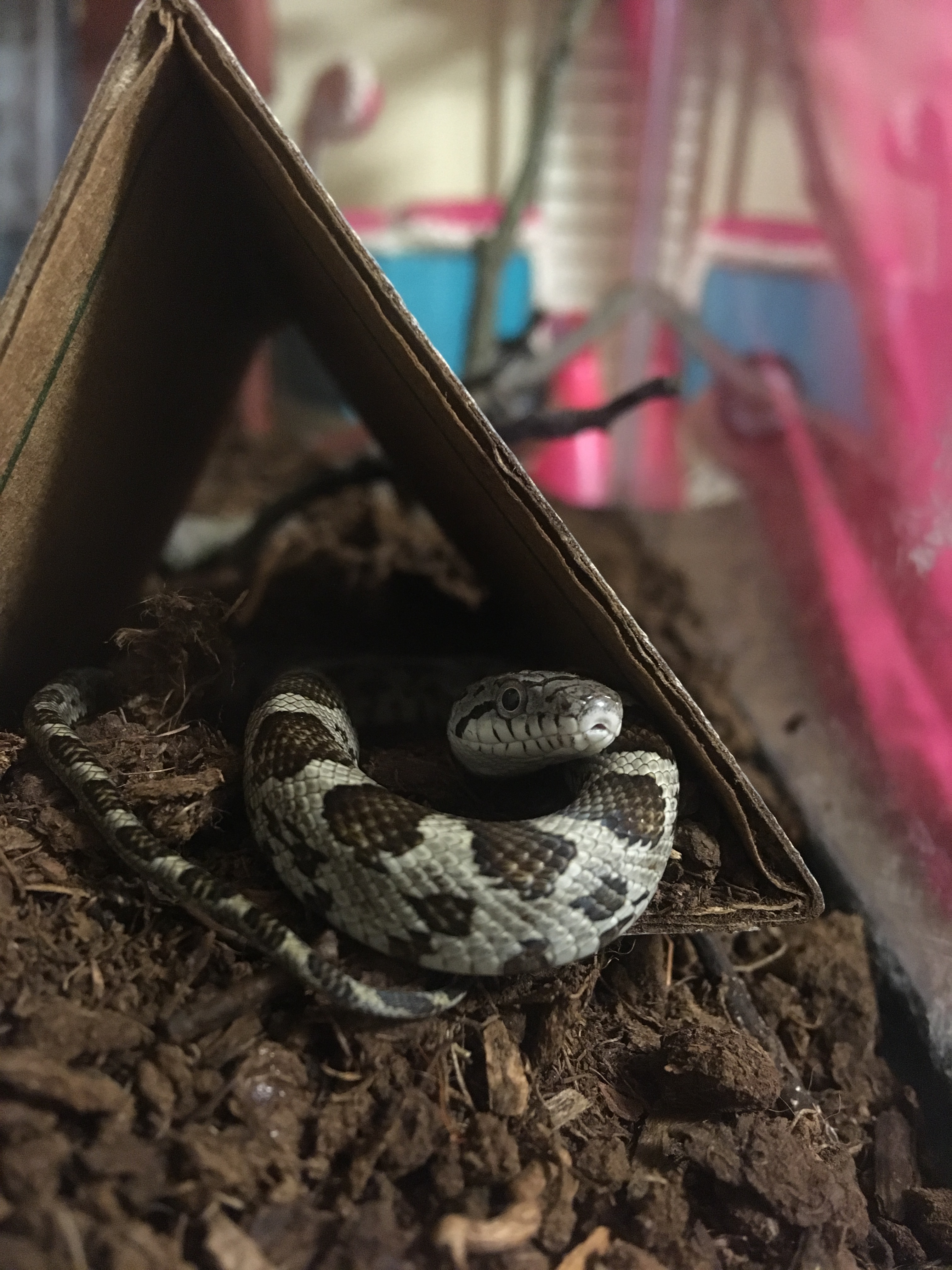 Welcome to the first blog post of Our Eclectic Life. We are going to pop in here every so often and tell you about what’s happening at the moment. Maybe we’ll let you in on some stuff we’ve done in the past. We hope to provide you some resources to find your own fun and bliss, too. Let us know about your adventures and interests in the comments below.

Malon gets a pet snake!

So, Malon got a snake. She’s been wanting one ever since we attended an earth skills festival and got in on a herpetology workshop.

That was like, what? Several years ago? Maybe we were hoping the urge would go away. Guess not.

However, my imagination didn’t exactly have to run away with me to know this wasn’t your average pet. I knew from personal experience about this stuff!

We went to my niece’s house out in the desert last year. Upon entering, she informs us that they’ve lost their corn snake and could we be careful where we stepped and generally be on the look-out. So I’m sitting there the whole visit wondering if a snake is going to slither across my lap. It was kind of creepy. They did find it…eventually. It popped up whilst they were eating dinner one evening a couple weeks later. I think it must have been pretty hungry after being gone for a couple of weeks.

So I’m just imagining this happening at my house. I’ve not lost any other pets in the house, though my neighbors had us watching their little green lizard while they were on vacation and well, there was a wee mishap. They didn’t have a lid on the aquarium, which we thought was a little weird. Sure enough, we went over to feed it one day and it was gone. What to do??

First thing we did was to stuff a towel under the door and block off the air vents. Then after calling our friends to tell them the news, we jumped on the information highway to get some inspiration. A little digging gave us some helpful ideas. We put flour on a piece of newspaper in the middle of the room with a dish of water in the middle and a warm light pointing to it. Wouldn’t you know, the next day there were little footprints in the flour. We couldn’t exactly put down one of those live crickets and expect it to hang around waiting to get eaten by the lizard – here’s me imagining tying a tiny string around a cricket leg – so we did the only thing possible and sat in the middle of the room and just kind of peered around and waited.

Aha! There amongst the toys, the little green anole was hanging out on a similar-colored piece of plastic. It was a little challenging but we got him back in the aquarium and this time, we put something on top to keep him in. We happily called the neighbors with the good news and then they promptly gave him to the pet store when they returned. Ah well.

So now, we have our own lizard. Well, sort of…one without legs anyway. We recently welcomed Balthazar into our home. Berry spotted him in our barn wrapped around some tall bamboo poles. We only have a few poisonous varieties of snake in our region. Most of the rest being harmless garden snakes. We see them a lot, so we weren’t worried….well, not TOO worried. This one was tiny and beautifully patterned. We put him in a box to bring him inside for identification. He wasn’t too happy. He was shaking his little tail trying to mimic a rattlesnake. We weren’t falling for it. 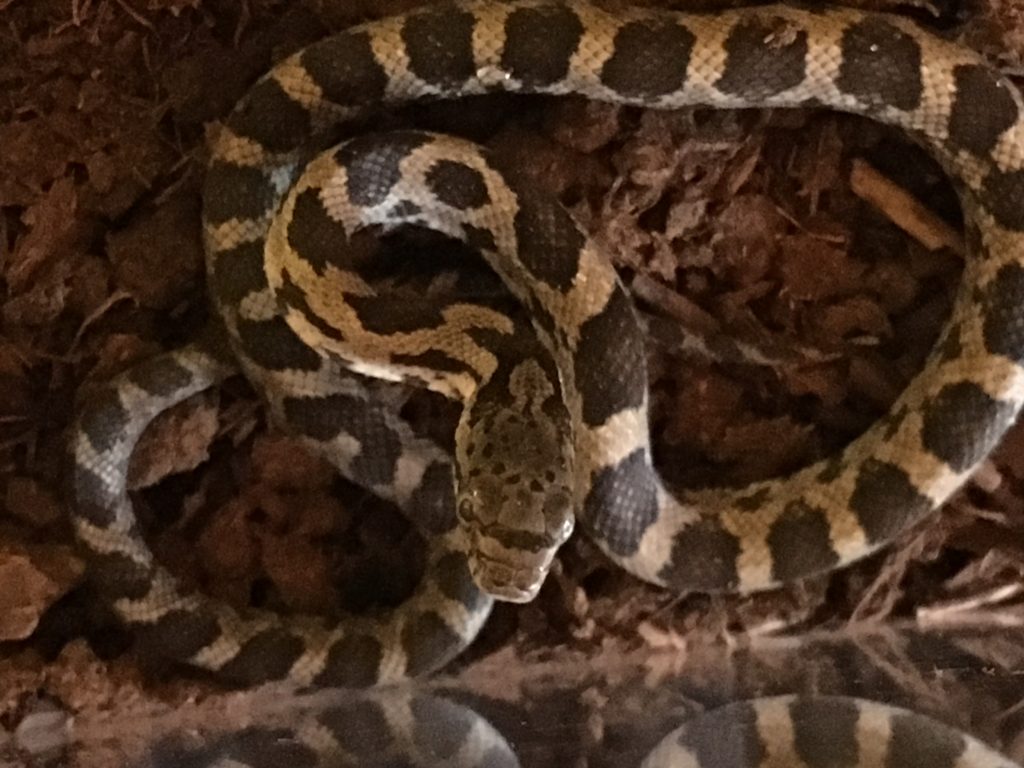 Turns out he’s a gray rat snake, just a baby, probably born about a month before we got him. I say him. We don’t really know what gender he is. That requires sticking a probe up his butt to see how far it goes. We decided we didn’t really need to know. So he’s a “he” to us and we named him Balthazar because we thought that sounded properly exotic. Mostly we just call him snekky….or “baby”, go figure. He’s terribly cute. You must see him.

We cleaned up an old fish aquarium and ran out and bought a fancy vented lid for him at the pet store. Oh, while we were there, we picked up a thermometer and a hygrometer. What’s that you say? It’s a little thingy for telling how much moisture is in there. You’re supposed to give them temperature choices – a gradient, as they say – so we got a couple of those stick on tape thermometers too. Remember when the pediatrician would stick one of those on your head to get your temp? Sure did beat some of the alternatives! Ugh! 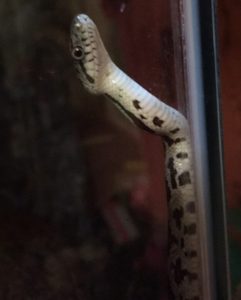 Anyway, we baked some sphagnum peat moss – we just happened to have some of that handy amongst our weird stash of organic matter – in the oven to make sure there weren’t any mites in there. Don’t want poor snekky to get the itchies! Covered the bottom of the aquarium with a thick layer, threw in a few choice knobby sticks and a little dish of water and a cardboard “hideout”. Wah-lah! Rat snake paradise! Snekky promptly dug himself under the peat moss and we didn’t see him for days. I don’t know what everyone else was thinking, but I was personally concerned that he had squeezed his little body out the impossibly small crack around the edge of the fancy vented lid and was warmly ensconced under the couch in my den.

A couple days later, he poked just his head up and fluttered his little black tongue at us. He likes to stay at the edge up against the glass, so we just look for where the peat moss is bubbling up like the Loch Ness Monster and we know where he is.

We still didn’t know what to feed the little guy. Thank goodness, again, for those interwebs. The answer machine! How did we ever live without it?? Somebody said they eat mostly mice and lizards. I figured that’s why they like to hang out in our barn. Lots of meeces in there, I can tell you. Many a nest in my boots and other important places, have I found. And many a tiny skeleton as well. Such is life. But this guy is too little at this point to handle the big mice. We went to the pet store and looked at frozen pinkies – those are the newborn babies – and even those looked too big.

So we put a few meal worms in there, borrowed from Berry’s turtle. I don’t think he wanted to have anything to do with those. Actually they pupated and now there are a couple beetles running around in there.

We were beside ourselves wondering what to do. You are only supposed to give them things that aren’t bigger than the diameter of their bodies. So we went to the pet store and asked them to let us root through the big master bag

of frozen pinkies and pick the tiniest ones. A little gross, but we detached and did the deed. Got three choice tiny pink baby mice in a baggie.

My niece said we should have a separate container for them to stay in while eating, for association purposes, so we got a little hermit crab box. We warmed up a pinky in hot water and set it in there with Balthazar, but no sale. After a while, we gave up!

Turns out he wasn’t up to eating yet. One day his eyes got a bit cloudy and before we knew it, he was shedding his skin. That was a sight. It’s so weird. They even peel their eyes! The skin is a complete replica of the snake! I know, I’ve seen it at the Natural History Museum, but this was OUR rat snake, which makes it just that much cooler.

So maybe that was why he didn’t want to eat anything. On Turkey Day, we set him up with a pinky again and a little while later, we looked and it was gone. He was a happy camper.

So that’s all water under the bridge. So far, he only eats about every other week. Seems a long time, but we figure he knows when he wants to eat.  A rat snake likes a little privacy while he eats…I guess it keeps him calm. So we stuck his little box in a darkish corner with a towel on it. We only got this rather poor photo of him swallowing the little pinky whole. And I thought it was gross to watch the turtle eat!

Bonding with our rat snake

He lets us hold him now and he doesn’t seem to get upset. He is so very soft and smooth. I thought it would be creepy to hold a snake, but it’s really rather relaxing to just let him weave himself through your fingers and then he’ll be still and enjoy your warmth.

Here are some places to find more information on rat snakes and their care:

Do you have a snake? Or some other interesting pet? We’d love to hear from you. Give us a shout in the comments below.